What is "the Gate District"?

Many people in the Gate District don't even know it exists. What is it? It is a redevelopment district, created by St. Louis ordinances in 1978 and supported by a covenant (See the article below for more about the covenant). The boundaries are Jefferson on the East, Compton on the West, I-44 on the South, and a line that runs mostly along Hickory on the North. It includes the Buder Park, Eads Park, Lafayette Terrace, and St. Vincent Park neighborhoods. 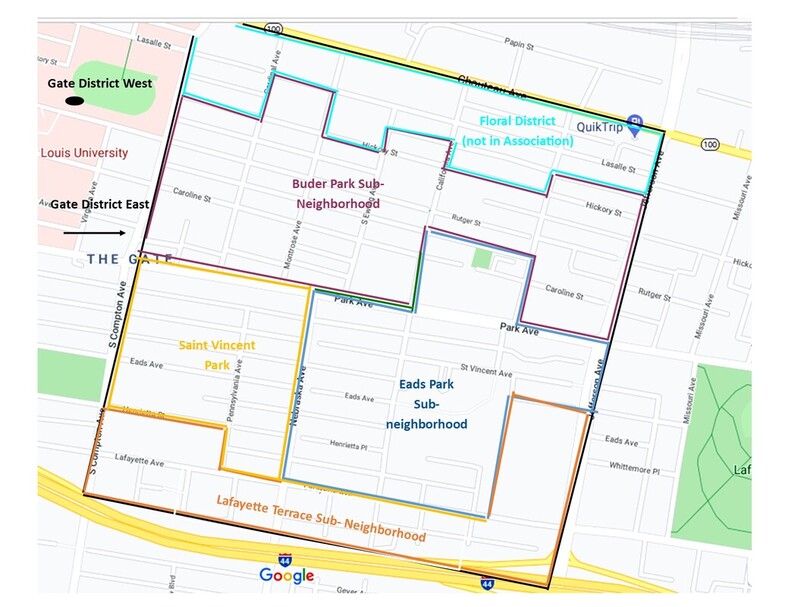 How - and why - did the Gate District come to be?

In the decade before 1978, abusive real estate practices, rampant vandalism, and the departure of the majority of its residents left our once beautiful and thriving community in ruins. Vacant and burned-out buildings were everywhere. Violence and crime ruled. Many homeowners simply abandoned their homes because no one would buy them - no matter how low the price.

It was at that point that the Gate District (formerly known as "Lafayette Towne" and before that as the "New Town in Town") was established to encourage and support the redevelopment and maintenance of our community.

Am I a member?

What does the Gate District mean to me?

The Gate District is about protecting and enhancing your property and your quality of life. By 1978, we had begun to learn two major lessons. The first was that while development was sorely needed, maintenance was equally important. The second lesson was that individual homeowners, business owners, and rental property owners cannot be successful acting alone: we need to join together to protect, maintain and improve the area as a whole, or our individual and neighborhood efforts just keep getting compromised.

The ordinances and covenant set up at that time, and still in effect, provided:

I have to pay money every year?
Why didn't I know about that?
Do I owe money for all the years since 1978?

First, you don't owe money for all those years since 1978. While the covenant and property owners' assessments have been legally binding all along, due to a legal quirk the Gate District wasn't able to accept any payments - or use any of the accumulated funds - from 1992 until March of 1999. While the law would require property owners to pay their 1992 - 1999 assessments now, the Gate District Board declared an amnesty for those years, and to accept payments only for current assessments.

Homeowners who were here before 1992 will remember the yearly assessment. Homeowners who arrived after 1992, even if their title company checked for "covenants and assessments", were often not told about it. Why not? Because of that "legal quirk."

A covenant, being a legal instrument attached to the land, never dies. It does however, require live human beings and a legally active organization to administer it. In 1992, amid great turmoil, the then responsible Lafayette Towne Association legally dissolved, before completing the transfer of its responsibilities to its successor organization, the Gate District East Association. What followed was a legal and logistical nightmare that lasted for seven long years. During that time, anyone that looked for a covenant found that one was recorded, but that it wasn't being applied. As a result, many of the title companies representatives concluded that it wasn't worth mentioning - all the more so as year piled onto year. That situation changed in March of 1999.